I have to admit that when I listened to LMFAO’s newest album, I did so with a pompous attitude. I expected their usual, tacky and sell-out-ish style, similar to Weird-Al. And although the first few songs were lackluster, I overall did like ‘Party Rock.’ Yes, their lyrics were womanizing and meaningless, but they are also fun and catchy. ‘Party Rock’ is PERFECT for a workout or party. And although ‘Party Rock’ does not have much staying power, its short lived reign should be fun-filled.

‘Party Rock’ is PERFECT for a night out, and carefree dancing…but, it does not have potential to be talked about in 5 or 10 years time.

Celeste Starchild’s song “The Witch is Dead” is strange, playing like a laundry list of Starchild’s conquests. And as one watches the video that goes with it, it’s almost hard not to laugh. The style of animation mixed with the immature lyrics gives one a feeling of accomplishment, because you were not the one who created that “art.”
As the video begins there is a cute moment as the first boy makes Starchild “loose her heart” (Starchild is actually carrying the heart in a suitcase for usexplained reasons). But, Starchild sooner dumps her first boy-toy and moves on. As the video progresses, Starchild goes through a slew of boys, all the while repeating their names and listing their memorable qualities.
The only thing that can be concluded from this video is that Starchild is attracted to criminals, liars, and other types of felons. Not only did Starchild write an impressively horrid song, but she managed to find a directer (Brian Bear) to accompany it with a just-as-horrid video.
You can check the music video and song out here.

As Yeasayer’s video for “Ambling Alp” begins one gets a visual of what appears to be bubbling lard. Confused, the viewer watches the video, searching for any explanation. This is where Yeasayer got it right: they managed to hook their audience in the first few seconds of their four mintue video.
As the video continues the viewer is shown flashes of different visuals, in true hipster-music nature, and has to wait some time for sort of resolution concerning the yellow bubbly liquid.
As the bubbly liquid finally reappears one sees the band covered in a hardened version of it. At this point, the video begins to get a little weird. The next frames consist of naked looking individuals removing the hardened yellow material, and what seems to be a massive orgy.
Although the video seems to be pointless, it is definitely interesting, and the music is great.
You can check the video out here 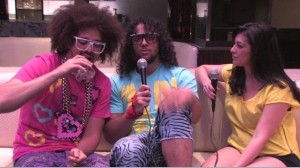