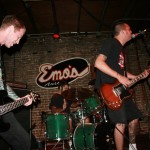 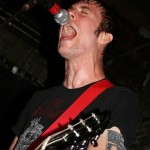 Off With Their Heads Interview by Brittany Reeber- August 29, 2009.  Brittany is our reporter from Austin Texas, University of Texas.

Off With Their Heads turned up their amps around midnight at Emo’s, a venue in downtown Austin, Texas. A small crowd of people formed a half circle around the stage where the four guys from Minnesota stood, giving their instruments a quick tune. Though there was a general air of excitement, the room wasn’t even close to being full. Where were all of Austin’s punks on a Saturday night?

They blasted out a slur of both old and new songs while a few pushed and danced below and others just watched from a distance. However, there weren’t nearly enough rowdy punks in the room to match the energy of the band. I wondered what had become of the “punk” scene or what “punk” even was right now. Sweaty after their set, Ryan Young, lead singer and guitarist, and Zack Gontard, back up vocalist and guitarist, crashed on a bench and gave me a glimpse in to their lives amidst the “punk” scene.

Zack- If there’s just a good atmosphere, and if it’s not five people in a basement smashing the microphones in our face then were generally happy.

You guys are all from Minneapolis, but you’re on the road a lot, what is home for you guys?

Ryan- Were only home for five days every two months, so nowhere really. We live in a van that is broken down… well right now a rental car and it sucks.

What do you do when you get home?

Ryan- We don’t do anything. We have that time to sit and do nothing and it’s kind of awesome.

Zack- Having alone time to do nothing is at a premium right now with all of us so we just kind of enjoy doing nothing.

Do you guys get angsty being on the road all the time?

Ryan- Not really at all.

Zack- Yeah it’s a lot better than having to go to work, that’s when we get angsty, having to work awful jobs that we hate. Previous to touring, we were all painters. We painted houses last summer.

I noticed that you guys twitter. How does technology affect the band?

Ryan- I just think it’s funny, like right now I could just twitter the dumbest thing I could think of.

And do you think it’s getting to your fans?

Ryan- All two hundred and thirty five of them.

What about downloading music?

Ryan- Yeah, it’s a good thing and it’s a bad thing. I like the fact that people can get stuff but it costs money to make stuff. It cost money to record records and the only way to make that back now for a small band like us is to go on tour and do this non-stop, or be on a bigger label where they pay for it, but we obviously haven’t had that opportunity yet. I don’t know… I can’t say anything because I don’t pay for music either. It is what it is. Why would someone pay for something they can get for free?

I bought your albums on iTunes.

Ryan- There you go. I buy stuff on iTunes all the time. I don’t even know how to illegally download.

Me either! That’s why I bought your album on iTunes.

Zack- (laughs) The technology thing is tough because it does make touring a lot easier. Booking a tour now, just getting on the internet and doing it, as opposed to going to a pay phone and calling long distance to people that you’ve never met before and asking them to book shows. It’s so different and a lot easier. And it’s so much easier to send people a MySpace link then a demo through the mail. So touring and exposure is so much easier but it’s a million times harder to make any money off record royalties, which is where bands made their money before 2000. It’s a totally different thing now. It’s weird…it’s a double-edged sword.

If you were a bar of soap, whose bathroom would you be in?

Zack- I hope you got that.

What do you think of the current ‘punk’ scene?

Ryan- Lame. Really lame. Tonight was actually my favorite show in awhile. I don’t know…people take themselves too seriously sometimes and it gets a little dumb.

Zack- Riding bikes as a political statement is pretty lame.

What have you seen change even within the last five years?

Ryan- Yeah and it’s like I have like four dollars in my pocket…four dollars to my name. I haven’t sold anything out.

What do you think gives some people that idea?

Ryan- Just because we do something that we like as opposed to going out and playing to four people for no money and then going home and working lousy jobs. Instead, we go out and we just do it everyday and we make a little money but just enough to get us by and we just keep doing it. We do what we like doing and who cares.

And are you guys just going to keep doing this as long as you can?

Ryan- Until November 14th. That’s when we have no more shows. We’ll just die. No…we’ll record a new record.

Will you guys have to get jobs?

Ryan- We probably should but I know for a fact I’m not gonna.

3 thoughts on “Off With Their Heads by Brittany Reeber”