There are some awesome gifts to give and get this holiday season.  Whether you gift yourself or your family and friends, you have lots to chose from. 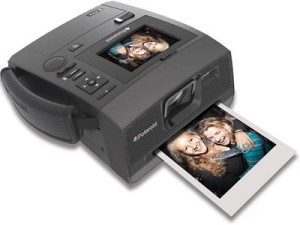 Polaroid’s Z340 replaced our earlier POGO Polaroid Camera and what an improvement!  We had so much fun snapping pix with this little gem and then the pictures are saved digitally so we could reprint them or upload them later. No ink cartridges to buy. The Polaroid Z340 Instant Digital Camera features a 14.0 megapixel sensor to snap, print and share. No computer connections are needed to get 3×4″ smudge-proof, water-resistant, tear-resistant, full-color prints. You can even view, crop and edit pictures before you print thanks to the bright 2.7″ color LCD on the top of the camera. Add a fun and useful border to your photo including the Polaroid Classic Border Logo format or upload custom borders. . Print up to 25 photos per full battery charge with the option to print date and file numbers.

The paper uses the zero ink technology and is less expensive than earlier Polaroid film products.  This is a win win gift to give or receive.  Stay tuned for more highlights from our gift and give segments this month. 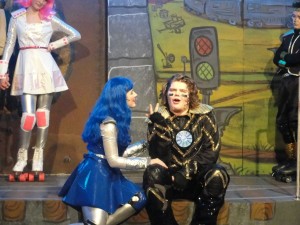 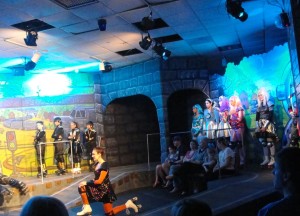 Listen to the interview
We were so lucky to interview Cyndi Graves who is the Performance Director for the Vee Co., producers of Sesame Street Live.

Sesame Street live performs this weekend 9-27 to 9-29 at the Parker Playhouse in Ft . Lauderdale, Florida.

Cyndi tells us that she wears many hats for the Vee Company.  She is the stage manager, in charge of rehearsals, auditions, performer’s notes, publicity events.  She calls the show and the action for the show.  There are actually 3 Sesame Street Live productions and there are at least one show, if not all 3 shows touring all school year long.  She has a month off in the summer but is busy all the rest of the time.   These shows are USA based but sometimes another country will put on an extended run of one of the Sesame Street shows with their own actors.

As far as this show, “Can’t Stop Dancing” appeals to kids, parents and even grandparents.  Sesame Street is one of the kinds of shows that everyone enjoys.  There are 20 characters, Cyndi explained, Bert and Ernie, Oscar the Grouch, Big Bird  and some new characters such as Abby Cadabby and Murray.  Murray acts as the emcee and leads us in counting and the word on the street.  Abby Cadabby loses her magic wand in the show and everyone is looking for it.  In the end she tells us, Elmo finds out he doesn’t need the magic wand or Abby Cadabby,  and he can do it himself.

There have been 44 seasons of Sesame Street on television.

If you are interested in learning more about live performances and Sesame Street Live, check out the Parker Playhouse this week from the 27th to the 29th.  Here’s a link for tickets.

Florida has one of the largest populations of homeless children in the U.S.

All of them have birthdays.

Make your card suitable for any age or gender.  Make an awesome, birthday card for a child experiencing homelessness.

Send  us a picture of your card and we’ll share it.  You can earn community service hours by making cool cards for kids in need.