Justin Biebers show in Miami Florida was a total success!

Pulling into the American Airlines Arena in Miami Florida, all you could see were girls dressed from head to toe in Bieber attire, and all you could hear were the shrieks of happiness and excitement. Dedicated and hopeful fans decided to wait outside at the back of the arena where all of the tour buses were, hoping they would catch a glimpse of the iconic pop star. Some people looked at them like they were crazy, saying there was no chance that they would get to see Bieber. Well sure enough, they were able to prove them wrong. After waiting outside for hours upon hours, Biebers tour bus finally pulled in. He was super grateful for all of his fans waiting, so he went over to them and ran along the gate swiping every ones hands with a huge grin on his face. After all the excitement was over, and he ran into the venue to do meet and greet, fans started filing inside. 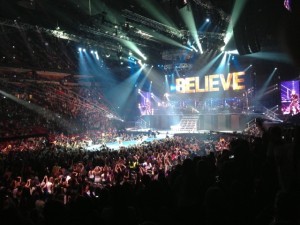 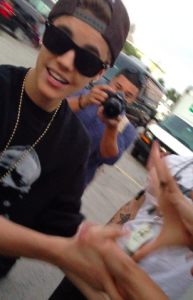 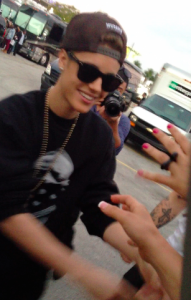 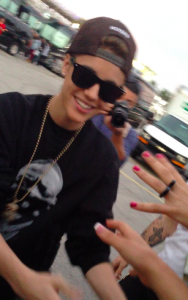 Justin has two opening acts at his “Believe Tour.” First, he had Jayden Smith, who did an excellent job at getting the crowd pumped and ready for an amazing show. Jayden’s sister Willow even appeared to do a duet with her brother for one song. After Jayden, Cody Simpson came on stage to sing a few songs. His beautiful voice and amazing dance moves got the whole crown on their feet dancing and singing along.

The wait was finally over! Justin’s entrance onto the stage was a total surprise to everyone. He came down from the ceiling, attached to two very large silver wings that had designs of music notes and guitars on them. The volume of the screaming was incredible, you could barely hear yourself screaming. But once he began to sing, all of the screaming died down, and everyone was singing along. It was truly amazing to hear every single person in that arena singing along to his songs. Justin went on singing and dancing his heart out. After the first song he was already drenched in sweat. You could tell that he was trying to put on the best show, and he was having a great time. He hit every note, sang every song with such enthusiasm and passion, and really made his fans feel special. Overall, Justin Bieber did an outstanding job at one of his last shows on his “Believe Tour.”

Bieber Fever by Alex Hilliard
January 26, 2012 – Justin Bieber makes his way to Miami, Florida for the first time this year on his Believe Tour, for yet another sold out concert. The seemingly ceaseless screams from the thousands of eager “beliebers” fill the air of the American Airlines Arena.
Once again, Justin Bieber and his production crew outdid themselves with a flamboyant and noteworthy show. The lights and graphics along with the exceptional dancers played such an enormous part in the show’s success. Bieber not only played the songs off of his new album Believe but also gave the audience a sneak peek of his new Believe acoustic album that was later released on January 29, 2013.
This was definitely a memorable concert that displayed a new side of Justin Bieber. I myself would highly recommend attending a show on the Believe tour, even if you have not listened to his previous music.