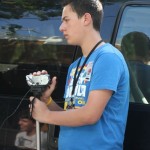 During the 2011 NFL Lockout, some players like Drew Brees are working hard, some players like Chad Ochocinco Johnson are having fun, and some players, like Bret Lockett are trying something completely unique for a football player. That, is singing. Bret Lockett, a safety for the New England Patriots, decided one day that he wanted to not just spend his life playing football, but also singing.

Bret is a R&B/ Rap artist, and has already started creating music. When I asked him what it is like to be a Professional Football player while a musician at the same time, he said it was different and unique and a good experience. Some of Bret’s inspirations for his music are Tupac and Jay-Z. Bret filmed his music video, Let’s Go in the Dominican Republic, which Bret described as the experience of a lifetime and a life changing adventure. But wait, there.s more. Bret is also a model and designs athletic attire and regular attire. You can check out Bret’s music video, Let’s Go right here.