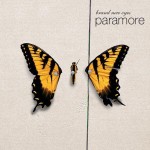 The emotional roller coaster of life is difficult enough for an average human being, but when put in the spot light after releasing a single, “Decode,” for the Twilight movie, Paramore was not adjusting well to the growing fame and outlandish rumors. Opening up about all your personal problems is not easy, especially when it’s to millions of fans all over the world. If Paramore did not make a big enough statement to catch your attention with their debut album All We Know Is Falling or their sophomore album Riot, then brace yourself for some deep, heartfelt, and personal lyrics on the bands third album Brand New Eyes. This newest album will answer all questions about the rumors the band avoided last year. Did front woman Hayley Willaims and lead guitarist Josh Farro have a relationship? Was the band on the verge of breaking up? The answer is “yes” to all the above. Paramore, however, learned that it was time to give up the facade, and talk out their problems because as they say in their song “Looking Up,” “I’d never trade it in, cuz I’ve always wanted this!”

The album right off the bat sets off with an antagonized vibe, and it is clear that Hayley Williams felt left out. She was not appeased living her dream alone, without some of the band members who worked just as hard to go platinum and play in sold out arenas. “Ignorance,” the bands first single, really shines a light on the division of the band with such pain staking lines as, “The friends who stuck together, We wrote our names in blood, But I guess you can’t accept that the change is good.” These are the lyrics the band mates had such a tough time writing on paper. In an MTV interview Hayley states, “I kind of brought in some ridiculous lyrics in for the guys to hear for the first time ever, you know after like a whole year of me being quiet about everything that I was feeling, and none of us ever stopping to hear each other out.”

When heading into the studio to record with Rob Cavallo, Paramore had only five songs to show him. However, the confidence the well known producer had in the band, allowed for Paramore to continue to write and finish up the painful but well needed recording process.
When it came time to actually tracking the instrumentals and vocals, the band did not have many takes on any of their songs. They wanted the CD to be unrefined. “Misguided Ghosts” and “Only Exception” are the two acoustic ballads that exemplify the raw sound at its best. There is one song, “All I Wanted,” that must have taken more then one take! If it is possible to have a new never before reached note named after you, then Miss. Williams has done it. In the last chorus the instrumental just stops, and it leaves Hayley singing acapella “ALL I WANTED WAS YOU,” and it will leave you dazed (in a good way.) Brand New Eyes has plenty of angry songs, but towards the end of recording you can truly tell that Paramore was done with belting out personal anger problems. They began to write songs that traced back to the peak of their success. “No one is as lucky as us,” is chanted in the chorus of “Where The Lines Overlap,” and that lyric right there shows how this band is grateful for this experience.

With a swamped schedule ahead of them and a continuous spot light, Paramore knew they were going to have to stay positive. The band’s song “Looking Up” is by far the most assuring song on Brand New Eyes, letting Paramore fans know, they are here to stay. Hayley Williams, Zac Farro, Josh Farro, Jeremy Davis, and newest member Taylor York learned it was time to look forward to the future, and the whole recording and writing process made them stronger as a band and as friends. Brand New Eyes receives a well deserved 5/5 stars.