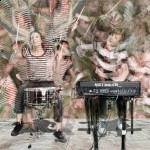 I have great difficulty characterizing concerts. They are composed of the quality of music, the band and the crowd. That’s a given. But, concerts can be phenomenal for a singular reason, possibly a gag (like balloons or feathers) or a beautiful person (there are tons of those at concerts), not necessarily a combination of those three factors. Last night, the Matt and Kim concert was amazing not because of their unique music or the insane crowd, but due to the band’s energy.

Kim, with the widest, goofiest smile on her face, hopped around the stage when she was not beating her drums vigorously. She occasionally stood on the drums, ever-raising the audience’s energy level. The variety of their songs did not matter, everyone just ate it all up with smiles on their faces the whole time. However repetitive the songs may have seemed – you can’t expect too much diversity from only a synthesizer keyboard and drum set – the duo threw in a few exciting covers, like Biz Markie’s “Just a Friend” and Major Lazer’s “Pon De Floor” which featured Kim wildly shaking her booty.
Finally, Matt announced that he was playing the last ‘thong’ (since apparently that’s what he slipped and said at a concert in Louisiana where he got too man thongs thrown on stage). He prefaced it by saying that this is a song that you should listen to if you ever need to cheer up, and that’s all I could think of while dancing to it.

I also have a tendency to go unprepared to concerts, either bringing the wrong shoes or too much stuff. By now I should be an expert, only wearing sneakers and bringing a cell phone and wallet. This concert was a point in case of my stupidity. At the Passion Pit concert, I lost my bag; at the Against Me! concert I lost my shoes. Now, I somehow held onto both but wasn’t as able to fully enjoy the constant motion of the crowd. My huge purse hung around my neck as I pushed and was shoved around. I had just gotten acrylic nails for the first time, and was so afraid of breaking a nail. As girly as that may sound, my alternative was to protect my nails and fist pump throughout the concert. Somehow no one was bothered by my Jersey Shore-like habits since they all were in their own realm of joy.

This was a happy concert. You could just lose yourself in the high energy and strong beat. I was happy as a lark (singing causes dopamine release in birds, surprisingly). So, I highly suggest that even if you may think all their songs sound the same, they are worth seeing for whatever price even if the concert was only $15. I left less stressed and sporting everybody’s sweat, not only mine, but also sporting a big, albeit exhausted, smile.