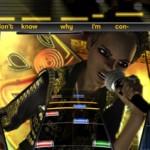 Did you get Rock Band over the holidays and are frustrated with the “unlocking” of the songs?

into “Rock Band 2,” which includes such options as a long-needed no fail mode — and a secret song-unlock code.

Once the code is entered, the unlock song modifier will be unlocked. Voila! You have just unlocked all of the songs available in “Rock Band 2.”

For the whole article, check it out here
Do you agree or disagree?  Let us know!

We’ve got a lot of great stuff to give away for the next 30 days! If you sign up to follow us on Twitter here, you will get your hands on the info first! If you are the 10th person to email us about the prize, you win! We’ll change the message when the prize is gone. Got it??? Prizes for you all month long that’ll make January look a whole lot better.

***Lauren West is our first winner and more to come all month long!