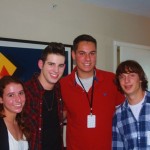 Interview with Adam Tyler at the Winter Music Conference in Miami Beach.

Last Friday I met up with the stars of the up and coming movie, 21 Jump Street, including Jonah Hill, Channing Tatum, and Ice Cube. The movie is about a pair of policemen that knew each other back from high school. The pair, Schmidt (Jonah Hill) and Jenko (Channing Tatum) are sent back to high school on an under cover mission. Together, these 2 re-visit their high school days and have fun while bringing down a synthetic drug ring. It is the perfect blend of a comedy and action movie.

The movie was based on the comedy series from the 1980’s also called 21 Jump Street, which starred Johnny Depp and Holly Robinson. When I spoke with the stars of the movie last Friday, they seemed to be the perfect team messing around with one another like brothers. They talked about how they loved working together and how much fun the experience was. Ice Cube also was in this movie, playing a police captain, Dickinson. He said he also enjoyed creating this movie and working with the two rising actors. Jonah Hill also talked to me on how he always wanted to be a writer, and writing 21 Jump Street was a great joy for him. He planned on producing 21 Jump Street for a while now, and now that is has been completed and is coming to theaters, he is very pleased.

According to Rotten Tomatoes, the film holds 100% approval rating from critics and has an average of 7.9/10. I recommend that all see this film.

“Chains of Love” by: Ryan Adams

Ryan Adams is not new to the music business that’s for sure. He has released numerous albums already and his latest album, Ashes & Fire, includes the song “Chains of Love”. The music video was recently released and was a hit. Since Adams is an alternative singer, his music usually does not appeal to me. However, when I heard this song, it changed my perspective. This song is great because it is easy to listen to and does not resemble a crazy rock song at all. In fact, the song reminded me of a Coldplay song, which is a very popular band that appeals to many different music interests. I would recommend this song to anybody because it has meaningful lyrics and a great melody.

Jane’s Addiction has a released their second single, “Underground”. It is true Jane’s Addiction music because this song is hardcore rock. However, I really liked how the guitar portion was compatible with the vocals. I also thought the music video was very well made and went well with the lyrics. I would recommend this song to anyone that listens to rock bands such as Red Hot Chili Peppers. I could for sure see this song being played a lot on the radio soon.