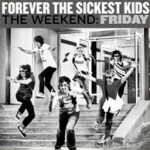 Forever the Sickest Kids Review- The Weekend: Friday
By: Alex Rivera
Recently, pop-punk band Forever the Sickest Kids released a new 7-track CD called The Weekend: Friday. This record is part one out of a three-part series, a new album per every “day” of the weekend. On Friday, FTSK returns with their catchy dance tunes that make any fan want to grab their hairbrush and sing into it, which proves that the band is staying true to their standards of lyrics about love, group chants, and the notorious chorus that’s bound to stay stuck in your head for about two weeks.

Friday starts off with “Do Or Die,” a song that incorporates keyboardist Kent Garrison’s synth beats with guitar riffs and bass drum beats. One thing that I noticed as I was listening to Friday was the more noticeable use of Garrison’s keyboarding interwoven in the tracks, which, unlike the previous album Underdog Alma Mater, gives the vast majority of the seven songs more of an electro-pop feel that seems to be a little more Metro Station-esque… in a good way. It doesn’t extremely divert the band from their roots, but it brings something new to the table, and that’s usually a good thing.

As the CD continues, tracks such as “Tough Love” and “She Likes (Bittersweet Love)” sound vaguely familiar, almost as if they’re new-and-improved versions of a couple of records off of UAM. But, although the guitar riffs might become slightly mind-boggling and have you question which album the record belongs to, both tracks capture FTSK’s usual melodic anthems. However, if repetition is your niche, then listen to tracks 4 and 6, “Take It Slow” and “What Do You Want From Me.” The beginnings of both songs sound EXACTLY THE SAME. When I was listening to it, I had to ask myself which song was which, because I honestly couldn’t tell the difference. That posed a problem which unfolded a couple of other ones on the album.

The last time I saw Forever the Sickest Kids, they stated that they wanted to try something new. They did in fact try something new… a hip-hop track. No, two hip-hop tracks. And, needless to say (as much as it breaks my heart), they failed miserably. Track 5 on Friday, “Hip-Hop Chick” throws in way too much synth for one person to handle, making the song sound like a random fast-paced techno track you’d hear at Ultra Music Festival. And, if the beats aren’t bad enough, the lyrics make references to Jay-Z, Soulja Boy, and “swagger” (no, not “swagGA,” “swagGER”). What? I couldn’t believe that one of my favorite bands would actually sing about this kind of stuff. To make things worse, the last song on the album does not suit the CD at ALL. “Hawkbot,” another overly-synthesized song, is an all-rap track that incoherently mixes in vocals and rhymes that don’t go with the beat, making it hard to understand. Plus, listening to vocalists Caleb Turman and Jonathan Cook rap is equally as humorous—not to mention pathetic—as the song itself (Vanilla Ice sounds better than they do). “Hawkbot” is undoubtedly Friday’s biggest disappointment.

Thus, it’s safe to say that The Weekend: Friday is a pretty decent album, despite its shortcomings. Personally, I prefer UAM to this 7-track EP-like record, but hey, it’s whatever floats your boat. If you’re like me, and you prefer the alt-rock, pop-punk FTSK dance tunes such as “My Worst Nightmare” and “Hey Brittany!” off of UAM, then you’ll find some pleasure in about two-thirds of the songs off of Friday. But, if you’re into the whole white-boy hip-hop thing, then you’ll get your fix here, too. Apparently, Friday has a little something for everybody.