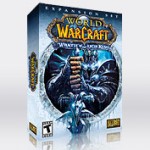 Blizzard World of Warcraft Wrath of the Lich King.
A Review by: Aden Katz, James McMullen and Carter Robberts

This is an Action adventure game and is a fantasy. The object of the game is to reach higher levels by defeating monsters and other creatures. Because World of Warcraft is an online game and many people are playing at the same time, the game is more fun and more interesting.  World of Warcraft costs 15 dollars a month. It’s possible that you could get hacked but if you contact Blizzard they will get your stuff  back.

What makes World of Warcraft different is that you don’t have a number of lives and the game never ends. It is a good game and it is easy at the beginning but gets harder as you get further into the game.