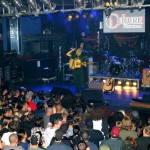 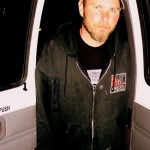 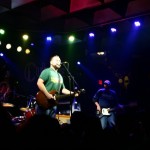 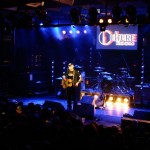 “Standing in Line to See the Show Tonight”
By Diana Ciuca

With my flower headband on and shiny European shirt, I felt out of place at the Thursday Night show. It wasn’t filled with the usual crowd of wasteful teenagers that have nothing better to do on their Saturday night. Instead, hardcore fans and devoted musicians composed the line outside the doors of The Culture Room. After my down-to-earth interview with Tim Barry, one of the opening acts, I joined anxious rockers in the smoke-filled room. Few sported Against Me! Shirts (a taboo, since it is beyond lame to wear the shirt of the band to their concert) while most fashioned the usual tight black shirt with another similarly cool group on them (i.e. Bad Religion, Anti-Flag…) while featuring their badass piercings and tattoos. My Vans flip flops stood out in the mass of converse All-Stars like a hot air balloon at a Blue Angels Air Show.

Ninja Gun, from Georgia, was the first group to hit the stage. With evident energy, they played their short songs to less-than-responsive group. People don’t react too warmly to opening bands. Yet, after every strong round of applause, the lead singer, a cute fellow (who resembled Elmer Fudd a bit), uttered, “ ’preciate it.” Their songs might have failed to get the crowd moving beyond an occasional clap party due to the lack of intense instrumentation, but mostly, I believe, to the light airy feeling of the music that would attract more of a pop/folk following than necessarily punk/folk.

Tim Barry, from Richmond, Virginia modestly walked onto the staged, grabbed his guitar and started jamming, without need for much explanation. Swaying passionately back and forth, he recalled memories of his hometown, past relationships, and even politics. The audience went wild as their connected to Tim based on their collective fallibility. Tim Barry sang of the misrepresentations of society along with the mistakes of human beings. With subjects like those, along with heartfelt thank you’s to the thrilled crowd, he won over even the most dispassionate spectators. He finished with an ad-lib.’d “Thank you guys again, I’m gonna go walk my dog now. She’s been waiting in the van for me.”

Against Me! finally decided to show up around 10:30 pm, after an extensive ‘instrument check’ and fog-set up. While waiting, the crowd did not grow too dissuaded, as many joked, “I remember when they used to tune their guitars on the own, not have someone else do it for them,” and “You know that a band is more popular based on the amount of time it takes between opening bands and their show time.” My favorite comment was from the back, someone ludicrously shouting, “I’m so excited for the Jonas Brothers! This is the Jonas Brothers Concert, right?” The sarcasm eased the tension as we all knew that the show was worth waiting and that (Thank God) this is not a Jonas Brothers concert – where a fully decorated Jo Bros shirtwould not be uncommon.

The band came on. The audience goes crazy. As if the place wasn’t already stuffed, with waves of pushing knocking people over, people started bouncing around once the first drum was beat. For not being the biggest Against Me! fan, I could recognize and sing along to most of their songs. However, there was not too much singing going on as the ‘bigger’ guys started crashing into each other in the center of the pit. I got pitted a few times – most of my own volition. Other instances, a rogue wave hit me, and I was ingested into the sweaty, pounding center. It was a good idea that I had left my camera with the merch guy, or else it would have suffered the same fate as my flip flops. Granted, my shoe choice was a horrible idea, almost as bad as paying $100 to see the Jonas Brothers last year. Nevertheless, they were gone, lost into the muck of the mosh pit. Guys started taking their shirts off, sweat everywhere… Music became of secondary importance to survival. A show is only as good as the energy through the audience; that energy was engulfing. Against Me! finished their set with mostly songs from New Wave, and even a few from As The Eternal Cowboy, along with Reinventing Axl Rose.

After pleas and lyrical demands from the audience, they finally concluded with a 4 song encore. Fretfully, I stared at my watch, knowing that it was way past my bed-time. Yet, all the agitation and waiting was definitely worth it. The pop/punk/folk/country/punk show left me with a couple of bruises, notably on my feet, but also a desire to explore the welcoming realm of punk-folk music.