Swept Away Media, a 15 year not for profit youth media organization, is reorganizing and aims to produce
a bi-weekly lifestyle and current events program for wide distribution to community and educational television as well as the internet.

We are an all volunteer organization that acts as an incubator for teen and college student creativity in the media.
Opportunities exist to interview and create media in entertainment, sports, current events and gaming.

Any interested teenagers should send a note with any experience or talents (video editing a plus!) to
sweptaway@me.com. Also let us know if you have access to an IPAD 2, 3 , mini or IPAD Air. Check out this website at www.sweptawaytv.com.
We will be meeting at FAU Boca Raton Campus so if you are located a great distance from FAU and do not have transportation, this probably is not for you.
However if you have access to an iPad 2 or greater or a video camera or a smartphone which you can record videos, we would welcome your submissions for consideration. Contact us at sweptaway@mac.com. 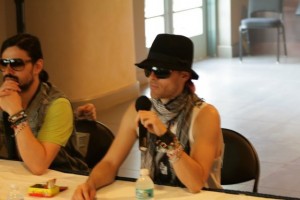 With the box office success of her latest flick, Obsessed, Beyoncé Knowles proves that there is nothing she cannot accomplish. Deemed as this year’s Fatal Attraction, Obsessed tells the story of Derek Charles (ldris Elba), a recently promoted asset manager, and his perfect life with wife Sharron (Beyoncé). When a seductive temp named Lisa (Ali Larter) begins working at Derek’s firm, his perfect life is thrown into chaos. What begins as harmless flirting turns into dangerous stalking when Lisa becomes obsessed with Derek. After Lisa attempts suicide and tries to steal the Charles’ baby, it’s up to Sharron, the not-so-typical housewife, to take care of Lisa once and for all.

If you’re a guy, go get a Fife! No your eyes didn’t just deceive you, that says Fife. In “I Love You, Man”, the irresistible companionship between Peter Klaven and Sydney Fife (portrayed by Role Model’s Paul Rudd and Forgetting Sarah Marshall’s Jason Segel) is enough to draw you in and care for two likeable losers. The chemistry between the two gives the viewer a real sense of friendship. Both actors carefully assess their characters and turn what may feel like cliché type roles into their very own original performance.

The laughs are present throughout and the film even delivers some laugh out loud moments. While it is vulgar, it is used within the boundaries of this type of movie.  You may feel like you are easily watching another Judd Apatow film, and while his usual players in Paul Rudd and Jason Segel star, it is director John Hamburg who steps in and takes a script in which he co wrote and crafts one of the funniest comedies to come out so far this year.

The dialogue is extremely witty and the delivery of the leads and the supporting actors such as SNL’S Andy Samberg,  Juno’s J.K. Simmons, The Cone Head’s Jane Curtin, My Name is Earl’s  Jaime Pressley, and Actor/ director of Iron Man; Jon Favreau. Everyone has memorable lines to work with and when you leave the theatre you are bound to use some of the terms that are used in the movie. This is the kind of movie that entertains, while elevating standards for raunchy comedies.

I Love you; Man is full of heart and may just be the type of movie that can put a big old smile across your face. Give this one a try and I promise it will not disappoint because to tell you the truth… I loved it, man!